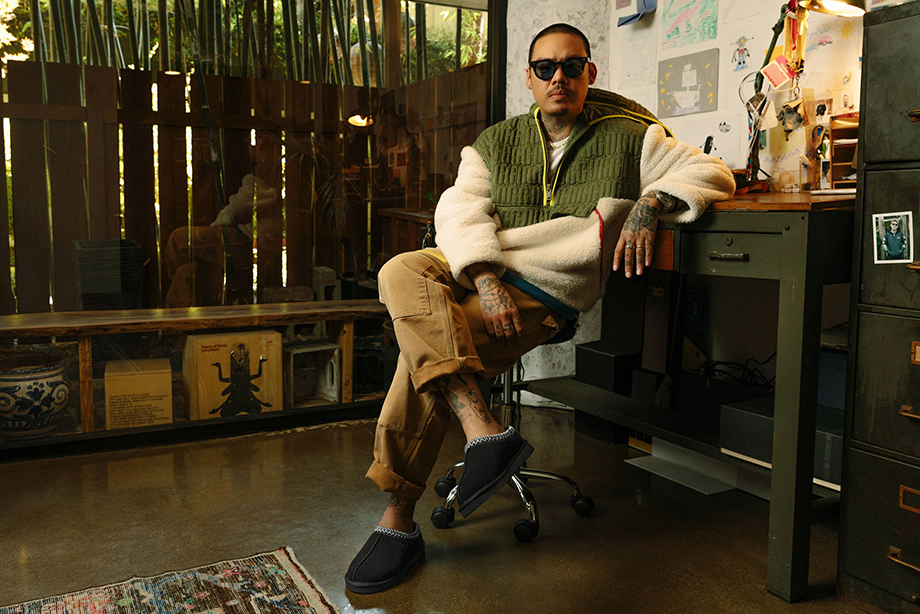 Continuing our FEEL ____ series of stories that inspire us, Dr. Woo is Los Angeles’ most sought-after tattoo artist for the influential elite. With a global following in the millions, he’s leading a movement where tattoos, art, and fashion become one and the same. While apprenticing under the legendary Mark Mahoney at Shamrock Social Club in Hollywood, Woo learned the design and intricacy of the single needle style for which he is known. From his private studio Hideaway, his interpretation of that style has taken tattoos from a subculture to the focus of popular culture at large. Wearing the Classic Mini and UGG Ready-to-Wear, meet Dr. Woo.

Introduce yourself and the space.

I am Dr. Woo. I am from Los Angeles and we are currently in my studio Hideaway at Suite X.

Describe a day in the life of Dr. Woo.

A usual day starts with waking up with the kids, getting them ready for school, letting the dogs out, making that very important cup of coffee, and getting ready. Usually I try to fit in a call on the way to work, then tattoo somebody or some people at the studio.

How do you FEEL these days and why?

These days I’m feeling pretty good, actually. My schedule and my routine the last three years was pretty hectic. There’s been a lot of flying, a lot of traveling, which became pretty inspiring for me lifestyle-wise because of the fast pace creatives have to move at these days. We need to constantly be reenergized or reintroduced to things that make us want or do what we do. Being able to travel and interact with a lot of different people enabled that. But now, it’s really important for me to reconnect with my home and where I’m from, my own den and my own people.

So, it’s actually been nice not having to hustle and bustle and getting to hang out with my kids and my wife more, getting to known them again. Not that I don’t, but we all change constantly, especially kids at such a young age. It’s been great to watch them grow literally, as opposed to seeing them from week to week. That part has been really nice. I think one of the silver linings of this whole thing was being able to connect spiritually and physically back with my home and everything under that umbrella. 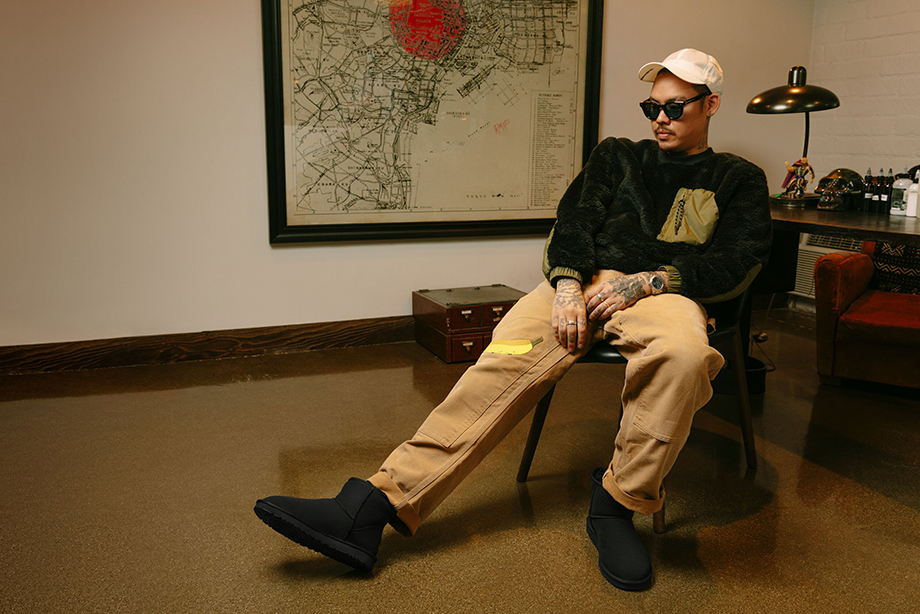 THE CLASSIC MINI AND NIKO CREWNECK

Both you and UGG share California roots. How has Los Angeles helped shape who you are?

I grew up, I was born in Los Angeles, so Los Angeles shaped me in a way that I think is distinct and unique compared to any other place in the world. We have all the seasons – well, no, we don’t have seasons, but we can go to all the weather in one day. We have the snow, we have the desert, we have the ocean, and we have the mountains. Everything is accessible here culturally, from food to plants to art supplies, fashion, creative culture – it’s all kind of rooted in the ground. So being here, just absorbing it and marinating in LA growing up has helped me immensely to become who I am, from skateboarding every day after school to visiting friends that were going to Art Center and CalArts, and then going to bars at night in my early twenties, just meeting people. I think there’s a freedom here to pursue your creative endeavors, which I feel some places I visited didn’t have that capacity. I grew up half an hour outside of the city, so it was a little bit tamer, but it did allow me to get out of where I was, and also have the close proximity that made it easy for me to tap in and tap out. I think that’s the beauty of LA, you know? We all move in different waves and different scenes, but somehow we’re all connected to the movement and spirit of how the city works.

As Los Angeles’ most sought-after tattoo artist with a global following in the millions, how do you FEEL about the responsibilities and expectations that come with influence?

As my career blossomed, as some would say, it has been a challenge to try to stay the course I set out to be on in the first place. But as we all are changing creatures, different situations arise, and you have to make choices and go down different paths that maybe you weren’t prepared for. Or now that you decided that it’s okay to accept that you want to change and do different things. So, to manage other people’s expectations or how I’ve influenced other people in the same lane as me, I try not to think of those things because my focus is on my path to bring joy and bring me hunger to keep doing what I do.

It is a bit of a distraction to think of all the other expectations and how other people view me and how I should act and behave, which hinders the creative process a bit, and also just the process of being yourself. It’s hard at times because I’m not perfect at managing those things, but at the end of the day when my head hits the pillow, I do try to jump a little bit further tomorrow than I did today and just keep trudging on and making sure I don’t lose focus on whatever challenge I’m in at the time. 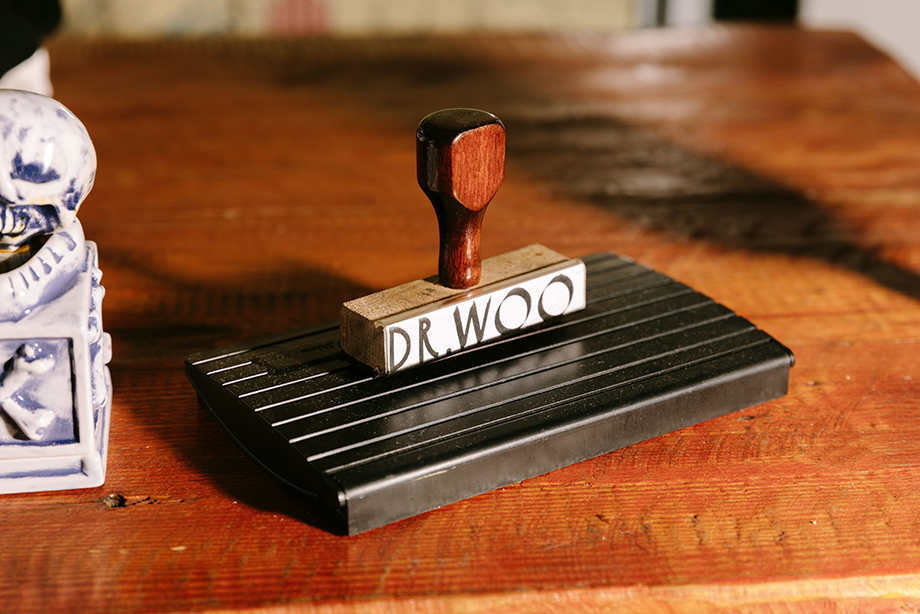 You are leading a movement where tattoo, art, and fashion become one and the same. Can you touch on how the three intersect for you?

These days, I’m at a crossroads working on things in fashion and art. I guess creative culture is its own category these days. Everyone has proof that we all have a creative part in us, and everyone is exploring that, which is awesome. I get really excited with things that I’m not great at or things that I want to get better at, and create an aesthetic or a universe that represents me. I’m always curious and fascinated by other creative genres; I see those things and go, “I wonder if I can bring my taste and my world to that and make it good.” Because sometimes it’s not good, but it’s the journey to that point which is also a lesson. Currently, I’m trying to focus on the main things that I really want to prioritize and give all my energy to. In the past, I have been juggling different projects and taking on things without the foresight of time and energy that it takes, which has all been great and led me to where I am now. I’m pretty comfortable with my creative process and trying new things, but there’s always room to get better and there’s always room for other ideas and inspiration. I just want to open myself up to that and make sure I take advantage of those opportunities.

Your single-needle style is signature – unmistakably detailed, delicate, and Dr. Woo. How did you develop it?

My signature look and tattoo style, in a wider spectrum, is called fine line black and gray – that’s something that’s been around since the early days. I only learned it because my mentor was one of the biggest champions of that style. It was just ingrained in me through my apprenticeship, and visually it was something that I started gravitating towards. I think the only difference was a bit of timing and different platforms of exposure. I used that technique and presented it in a way that wasn’t of the norm, taking mundane and utilitarian objects and making tattoos that were a little bit smaller and detailed and, in a weird way, conceptual for some people. Other things were just very graphic and technical, which at that time wasn’t something that everyone was getting. There was just a look to them, and I think I liked the idea that it didn’t have to be a huge, dense commitment for someone that didn’t have a lot of tattoos; you can use them as accessories and little souvenirs, and they didn’t have to be such a serious story because sometimes a minimal image has just as powerful a narrative as a huge back piece.

How do you FEEL when you create?

When I am in the zone of just creating, I feel very honest with myself, and the cool thing about being honest is that it’s not always great. There’s positive moments, but then there’s also moments where you can reflect and it’s almost like self-conditioning or a bit therapeutic. As long as you don’t have some commercial intent or you’re doing it for someone else, I think it’s a great process to get to know yourself again as a creative.

How does it FEEL to know your work resonates with others?

For a long time, I didn’t think about how my work would resonate with other artists or other people. Maybe because I was insecure with myself and I just wanted to make sure that I was okay with it first, but looking back, I think if anyone was able to draw some inspiration from it or be affected in a way that had them think a little bit, not just visually but also inwardly – it doesn’t have to make someone feel like they need to grind more or be more creative, just as long as it made them feel anything. The world is all based on our emotions and how we interact with each other, and those little ripples can affect so many bigger things down the line. I think just the positive creative reference for anyone, that’s good for me. 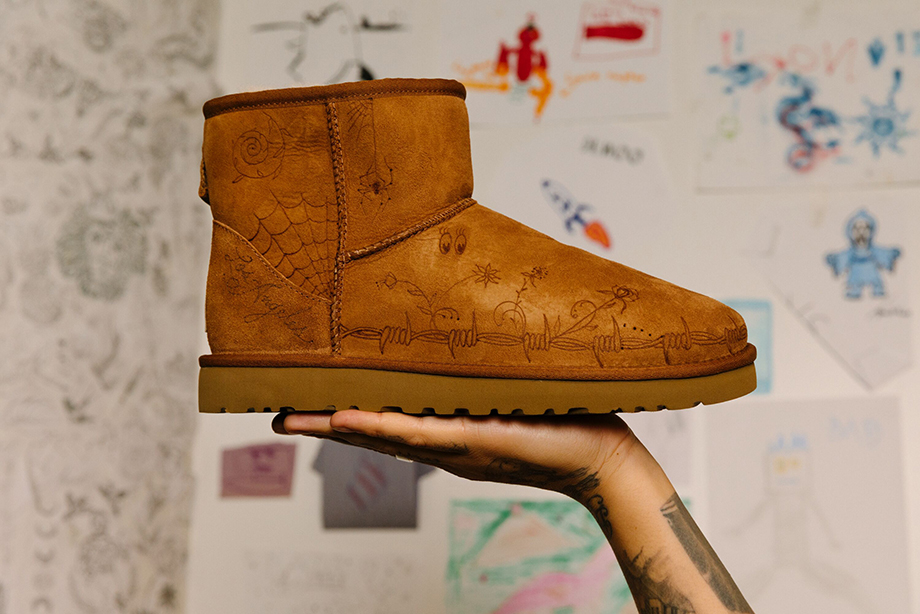 Tell us about the Classic Mini you are customizing.

When it comes to drawing on or customizing anything that I’m wearing, it always takes me back to when I was a kid in class. As an artist as a kid, I loved drawing on everything. I just wanted to make things a little bit personalized. I always drew little flowers, my spider (which hints that there’s something bigger to be woven), and barbed wire because I’m always a little bit guarded, but beneath it, I’m very gentle in a sense.

So, I did some barbed wire with flowers interwoven in it. Just my little motifs and my Woo eyes because the two O’s in my name always reminded me of big eyeballs. I went at it like I would when I was a kid and not try to be perfect – I wanted to make it look a little hand done and unique for them.

How do you plan to style your pair this season?

Lately I’ve been home a lot painting, drawing, or doing whatever it is I’m doing – so definitely in the studio. They’re so comfortable, but also in a weird way, not so precious. You can go outside or around the house in them, you can work in them, you can do whatever. So, the idea of customizing them and making them age with more wear is kind of what I like.