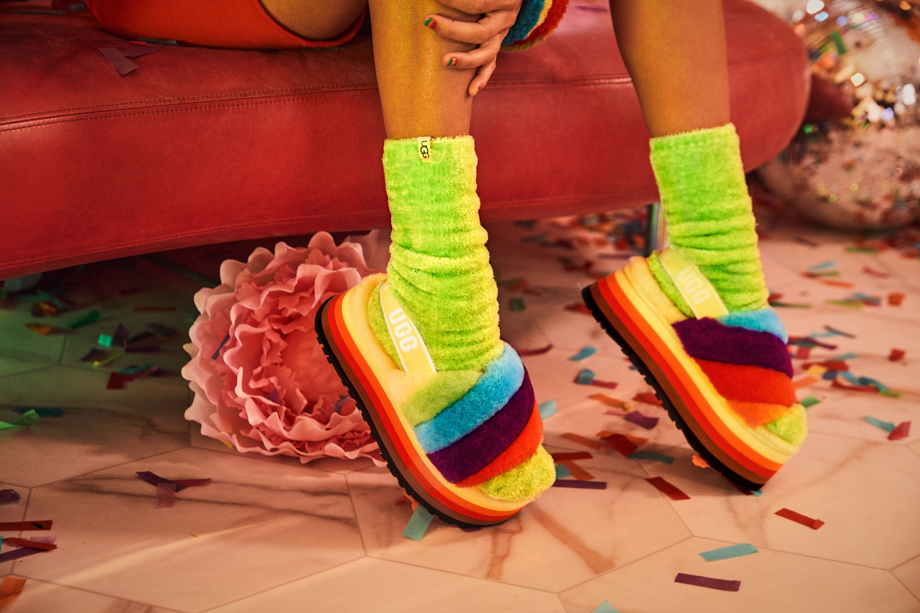 NO PURCHASE OR PAYMENT OF ANY KIND NECESSARY TO ENTER OR WIN. A PURCHASE DOES NOT IMPROVE YOUR CHANCES OF WINNING. VOID WHERE PROHIBITED OR RESTRICTED BY LAW, RULE OR REGULATION.

By participating in UGG SS21 Pride Prom-in-a-Box Sweepstakes (the “Promotion”), each Entrant (defined below) unconditionally accepts and agrees to comply with and abide by these Official Rules and the decisions of Deckers Brands (“Sponsor”), which are final and binding in all respects. Sponsor is responsible for the collection and selection entries and the Promotion’s overall administration. Entrants should look solely to Sponsor with any questions, comments or problems related to the Promotion. The Promotion is in no way sponsored, endorsed, approved or administered by, or associated with, Instagram.

1. ELIGIBILITY: The Promotion is open only to (i) legal residents of the 50 United States and the District of Columbia; (ii) who are 18 years of age or older as of the start of the Promotion Period (defined below); and (iii) who have a valid public Instagram account (individually “Entrant”, collectively “Entrants”). Employees of Sponsor (“Participating Parties”) and their parent companies, affiliates, partners, subsidiaries, related companies, advertising and promotion agencies, and all others associated with development and execution of this promotion, as well as immediate family members (defined as spouse, parents, children, siblings, step-sibling, step-child, in-laws and spouse of any of the foregoing, regardless of where they reside) and those living in the same household of each (people who have shared the same residence at least three months over a period of one year prior to the start of the Promotion Period), whether or not related, are not eligible to participate or win.

4. ENTRY CONDITIONS: In case of dispute over who submitted a winning Entry, the authorized account holder of the social media handle and/or the e-mail address provided at the time of Entry will be deemed to be the Entrant. “Authorized account holder” is defined as the natural person who is assigned to a social media account by the provider and/or e-mail address by an Internet access provider, on-line service provider, or other organization (e.g., business, educational institution, etc.) that is responsible for assigning e-mail addresses for the domain associated with the submitted e-mail address. Any attempt by an Entrant to obtain more than the stated number of Entries by using multiple/different e-mail addresses, identities, registrations, accounts or any other methods may void that Entrant’s Entries and that Entrant may be disqualified, and any potential prize may be forfeited. Each potential winner may be required to show proof of being the authorized account holder. Entries generated through a third-party website or software in any way other than the manner set forth in these Official Rules are prohibited, and Sponsor reserves the right to disqualify any Entrant(s) using such methods if discovered by Sponsor. Sponsor will not verify receipt of Entries. Entries become property of Sponsor and will not be returned.

5. PRIZE: Five (5) winners will each receive the following: Prom-in-a-Box from our #UggPride Capsule (aggregate retail value is USD $300) (“Prize”). Actual value of prizes may vary and Sponsor will not award the difference between aggregate and actual values. Prize fulfillment is based on availability and Prize may differ from promotion images. Sponsor reserves the right to substitute a prize of equal or greater value for the Prize in its sole discretion, unless such substitution is prohibited by law. Prizes are non-transferable and not redeemable for cash. Sponsor need not substitute a prize based on the winner’s request.

6. CLAIMING PRIZE: Please allow 12-14 weeks for Prize delivery from the time a winner provides delivery information to Sponsor. All federal, state and local taxes on prize, if any, and all costs and expenses related to the acceptance and use of the Prize not specified herein as being provided are solely the responsibility of the winner. Winners of a prize valued at $600 or more will receive a Federal Tax Form 1099. Winners may be required to provide their Social Security number or tax ID for tax reporting purposes if Sponsor is required to file an IRS Form 1099 with the Internal Revenue Service for the fair market value of a Prize awarded and accepted. We recommend that you consult with your tax advisor if you have further questions. Sponsor may disqualify a winner and select an alternate winner if any Prize is returned undeliverable.

7. ODDS OF WINNING: The odds of winning depend on the total number of eligible Entries received.

Once each potential winner’s eligibility is verified, he/she will be confirmed as a winner. Prizes will be sent to the winners within 12-14 weeks from the date the winners are confirmed. All decisions of Sponsor on all matters relating to this Sweepstakes, including, without limitation, decisions related to its selection and determination of potential winners of this Sweepstakes shall be final and binding and not subject to challenge or appeal.

9. PUBLICITY: Except where prohibited or restricted by law, participation in the Promotion constitutes Entrant’s consent to Sponsor’s and its agents’ the right to use and or publish of the Entrant’s full name, likeness, photographs or other likenesses, voice, video, opinions, testimonials, biographical information (in whole or in part), hometown, city and state of residence and any other information submitted to Sponsor by Entrant for promotional purposes, or on a winner’s list, if applicable, in any media, worldwide and in perpetuity, without further payment or compensation, in any and all forms of media, now known or hereafter devised.

10. GENERAL CONDITIONS: Each Entry submitted (i) must be in keeping with the Sponsor’s image (as Sponsor determines in its sole discretion), (ii) may not be inappropriate, offensive, libelous or defamatory, pornographic, sexually explicit, contain nudity, unlawful or plagiarized, (iii) must not be harassing, abusive, threatening, harmful, vulgar, profane, obscene, excessively violent, racially, ethnically or otherwise objectionable or offensive in any way, (iv) may not violate or encourage others to violate any law, statute, ordinance or regulation, (v) may not defame or invade publicity rights or privacy of any person, living or deceased, or otherwise infringe upon any person’s personal or property right or any other third party right, (vi) may not contain commercial or corporate advertising, including display of corporate logos, brand names and slogans, other than those relating to Sponsor, (vii) may not include references to alcoholic beverages, tobacco, drug paraphernalia, firearms or any depiction or representation thereof and (viii) may not include any virus, worm, corrupt file, Trojan horse or other forms of corruptive code or content that may harm or compromise a web site or the proper conduct of the Promotion. Sponsor is not responsible for technical, hardware or software failures, malfunctions, lost or unavailable network connections or failed, incomplete, garbled or delayed computer transmissions or unforeseen schedule changes that may limit an Entrant’s ability to participate in the Promotion, even if caused by Sponsor’s negligence. Entries generated by script, macro or other automated means or with the intent to impair the integrity of the Promotion will be void. Sponsor has the sole discretion to modify, cancel or suspend this Promotion should viruses, bugs, unauthorized human intervention or other causes beyond Sponsor’s control affect the administration, security or proper play of the Promotion or Sponsor otherwise becomes incapable of running the Promotion as planned. Sponsor is not responsible for changes to Entrant’s contact information. Any individual who attempts or otherwise encourages, directly or indirectly, the submission of false Entries, as determined by Sponsor, will be disqualified. Sponsor has no obligation to return any Entry, if applicable, submitted by a disqualified Entrant.

11. RELEASE: As a condition of participating in the Promotion, Entrants release Sponsor, Instagram, and Participating Parties and their respective affiliates, subsidiaries, parent corporations, advertising and promotional agencies, and all of their officers, directors, shareholders, members, employees, and agents (collectively, the “Promotion Entities”) from liability, for loss, harm, damage, injury, cost or expense whatsoever including property damage, personal injury and death that may occur in connection with, preparation for, travel to, or participation in the Promotion, or possession, acceptance or use of prizes or participation in any Promotion-related activities and claims based on publicity rights, copyright or trademark infringement, defamation or invasion of privacy and merchandise delivery.

12. FORCE MAJEURE: If, for any reason, the Promotion (or any part thereof) is not capable of running as planned by reason of fire, flood, storm or other natural disasters, riot, strike, civil commotion, governmental regulation or any other causes beyond the control of Sponsor which, in its sole opinion, corrupt or affect the administration, security, fairness, integrity or proper conduct of the Promotion (or any part thereof), Sponsor reserves the right at its sole discretion to cancel, terminate, modify or suspend the Promotion.

13. LIMITATION OF LIABILITY: The Promotion Entities are not responsible for: any incorrect or inaccurate Entry information; human errors; technical malfunctions; lost, stolen, deleted, mutilated, mis-delivered, postage due, illegible, incomplete or untimely Entries that may limit Entrant’s ability to participate in the Promotion, even if caused by Sponsor’s negligence; failures, omissions, interruptions, deletions, or defects of any telephone network, computer online system, computer equipment, servers, providers, or software, including any injury or damage to Entrant’s or any other person’s computer relating to participation or inability to participate in the Promotion; inability to access the site or upload information or data; theft, tampering, destruction, or unauthorized access to, or alteration of, Entries; data that is processed late or incorrectly or is incomplete or lost due to telephone, computer, or electronic malfunction or traffic congestion on telephone lines or the Internet or any website or for any other reason whatsoever; printing or other errors; or any combination thereof. Proof of uploading information or data or entering information at the site is not considered proof of delivery or receipt. Illegible, duplicate and incomplete Entries will be disqualified.

WITHOUT LIMITING THE FOREGOING, AND EXCEPT WHERE PROHIBITED BY LAW, EVERYTHING REGARDING THIS PROMOTION, INCLUDING THE PRIZE, IS PROVIDED “AS IS” WITHOUT WARRANTY OF ANY KIND, EITHER EXPRESS OR IMPLIED, INCLUDING, BUT NOT LIMITED TO, THE IMPLIED WARRANTIES OF MERCHANTABILITY, FITNESS FOR A PARTICULAR PURPOSE, OR NON-INFRINGEMENT.

15. DISPUTES & GOVERNING LAW: Except where prohibited by law, each Entrant agrees that (i) any and all disputes, claims, and causes of action arising out of or in connection with this Promotion, or the prize awarded, shall be resolved individually, without resort to any form of class action, and exclusively by final and binding arbitration under the rules of the Judicial Arbitration and Mediation Services, Inc. (“JAMS”) and held in Santa Barbara, California, before one arbitrator to be mutually agreed upon by both parties; (ii) judgement upon such arbitration award may be entered in the district courts in San Francisco, California; (iii) any and all claims, judgments, and awards shall be limited to actual out-of-pocket costs incurred, including costs associated with entering this Promotion, and in no event will any Entrant be entitled to receive attorneys’ fees or any other legal costs; and (iv) that under no circumstances will Entrant be permitted to obtain awards for, and Entrant hereby waives all rights to claim, punitive, incidental, and consequential damages, and any other damages, other than for actual out-of-pocket expenses, and any and all rights to have damages multiplied or otherwise increased., The parties agree to share equally in the arbitration costs incurred.