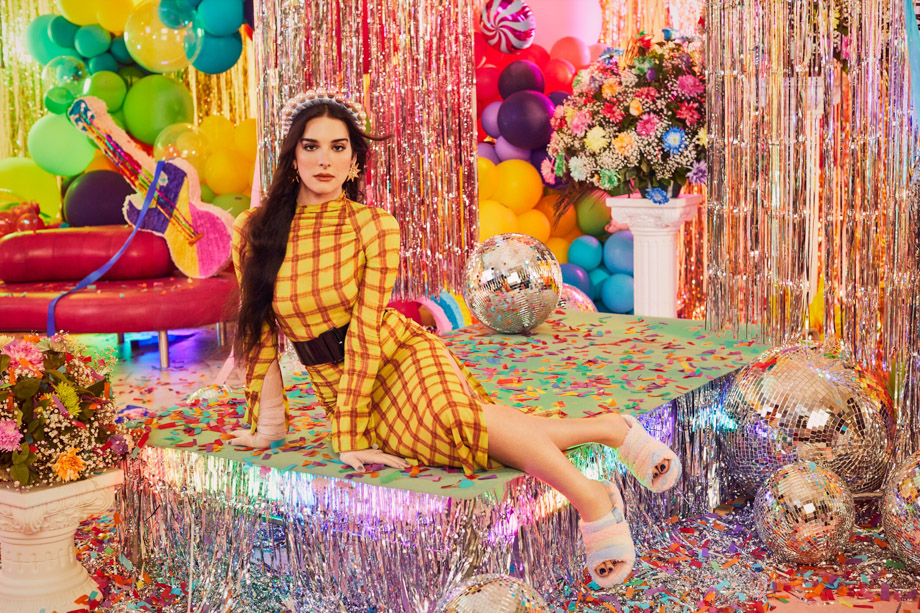 UGG believes prom is an experience everyone should get to enjoy. For our fifth year, UGG and Pacific Pride Foundation have reimagined the age-old tradition with PROUD Prom – an inclusive event with local LGBTQIA+ and allied youth from Santa Barbara and the coastal communities of California. A celebration of identity and love, this year’s virtual prom included friends of the brand like Hari Nef.

Hari Nef is an actress and writer in New York. Her roles include Alessia in Jeremy O. Harris’ Daddy (2019), Blythe in You (2018), Bex in Assassination Nation (2018), and Gittel in Transparent, for which she received a SAG Award nomination. She will next appear in the comedy film 1Up, directed by Kyle Newman. Nef’s writings on fine art, film, sex, and identity have been published in Artforms, GQ, L’Officiel, Dazed, and Vice.

To extend the story of our campaign, we interviewed her on a range of subjects from identity to style.

It’s important to know how you want to move through the world so you can get the most out of it. I think inside we’re all chaotic and unique and bizarre, and making sense of that mess with the outside world can be daunting. But if there is an argument I could make for identification – for saying “I’m this,” or “I tend toward that” – it’s community. You can find other people whose chaos resembles yours, and that makes it feel more manageable.

Community is the only thing that keeps me coming back to places where they hang that rainbow flag or the pink, white, and blue flag. If it weren’t for the people who coalesce around these identities and conversations, I would feel no need for them. It’s that moment of looking around and seeing yourself – identifying with people who come from different walks of life, different parts of the country, different parts of the world, different backgrounds, and sharing an experience around gender or sexuality or both – that quite often leads to other points of commonality. We’re all living in the same world. It’s so funny: I meet people and it’s like, “Oh, you also played that video game. You were also obsessed with that cartoon character. You like this song from 1996, that remix that’s only on YouTube and not on Spotify.” There’s a weird alchemy of how this stuff works. That’s where I find the holiness and beauty in the sacred aspect of queerness. It’s even the thing that allows me, spurs me, inspires me to identify as that publicly. 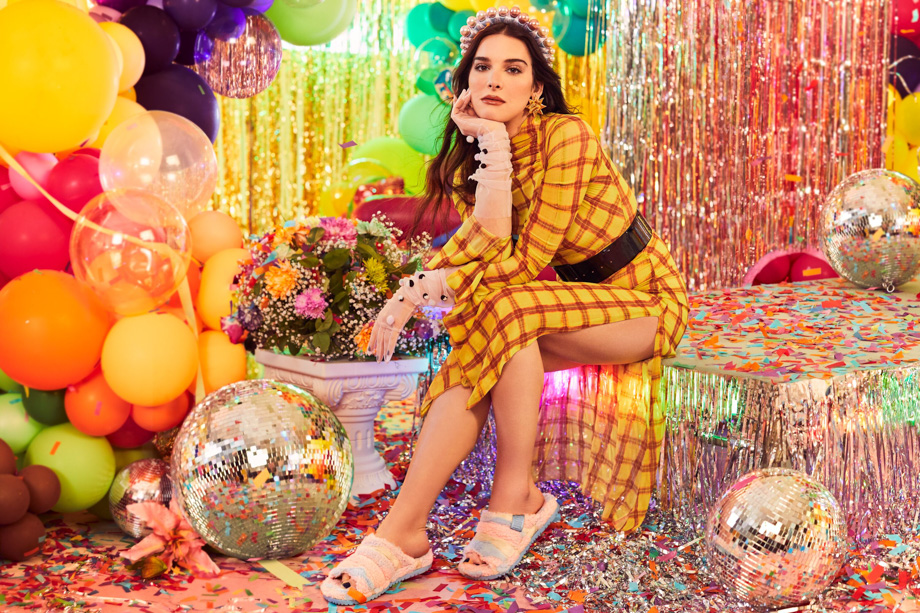 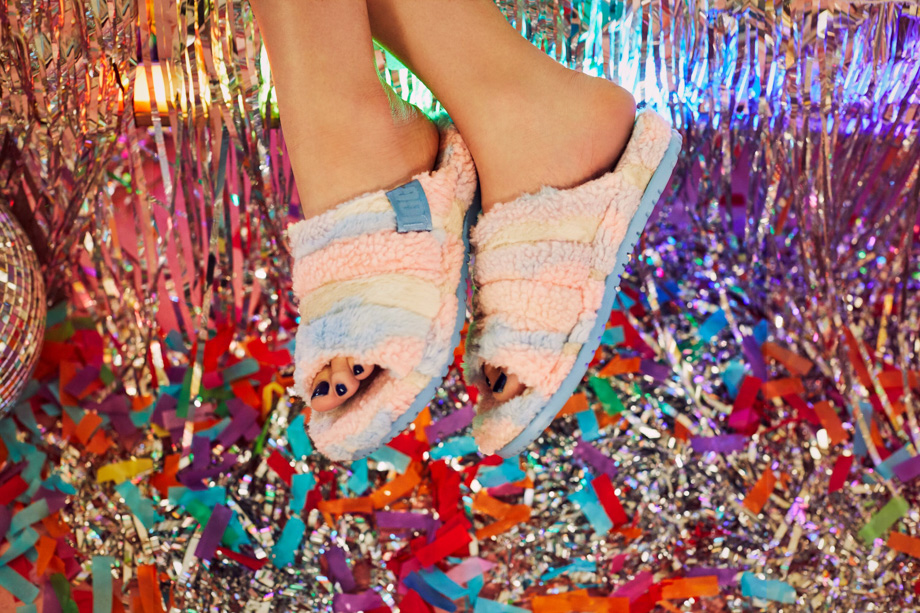 Queerness to me, pride to me – it’s level three. The first level was like “I’m here, I’m queer, I’m trans.” The second level was “Oh, I’m in a place in my transition where it’s like, don’t call me trans, I don’t want to do a pride campaign, I don’t even want to talk about this ever again. I’m a woman. I’m done.” Then level three is like, “I am queer. I am trans.” It’s not the only thing – it’s not even the defining thing – but it’s a thing, and it’s a cool thing. It’s kinda fab. It’s a part of me, the same way where you grow up is a part of you, your religion is a part of you, the books you read, the music you listen to.

I think representation is like chicken soup for people. I think that identification or representation can make people feel good about themselves. I don’t think representation alone can change the world. I think that must happen on a political and structural and grassroots, groundwork level. Appearing in a campaign is not going to house Black trans women. Appearing in a campaign is not going to legalize gay marriage nationwide, but queerness shouldn’t be all about the doom and the gloom. Pride is about celebrating and the need to celebrate – not just to celebrate, but to celebrate with me and mine, my people, my dolls, my girls. Especially over the past year, that urge has never been stronger. 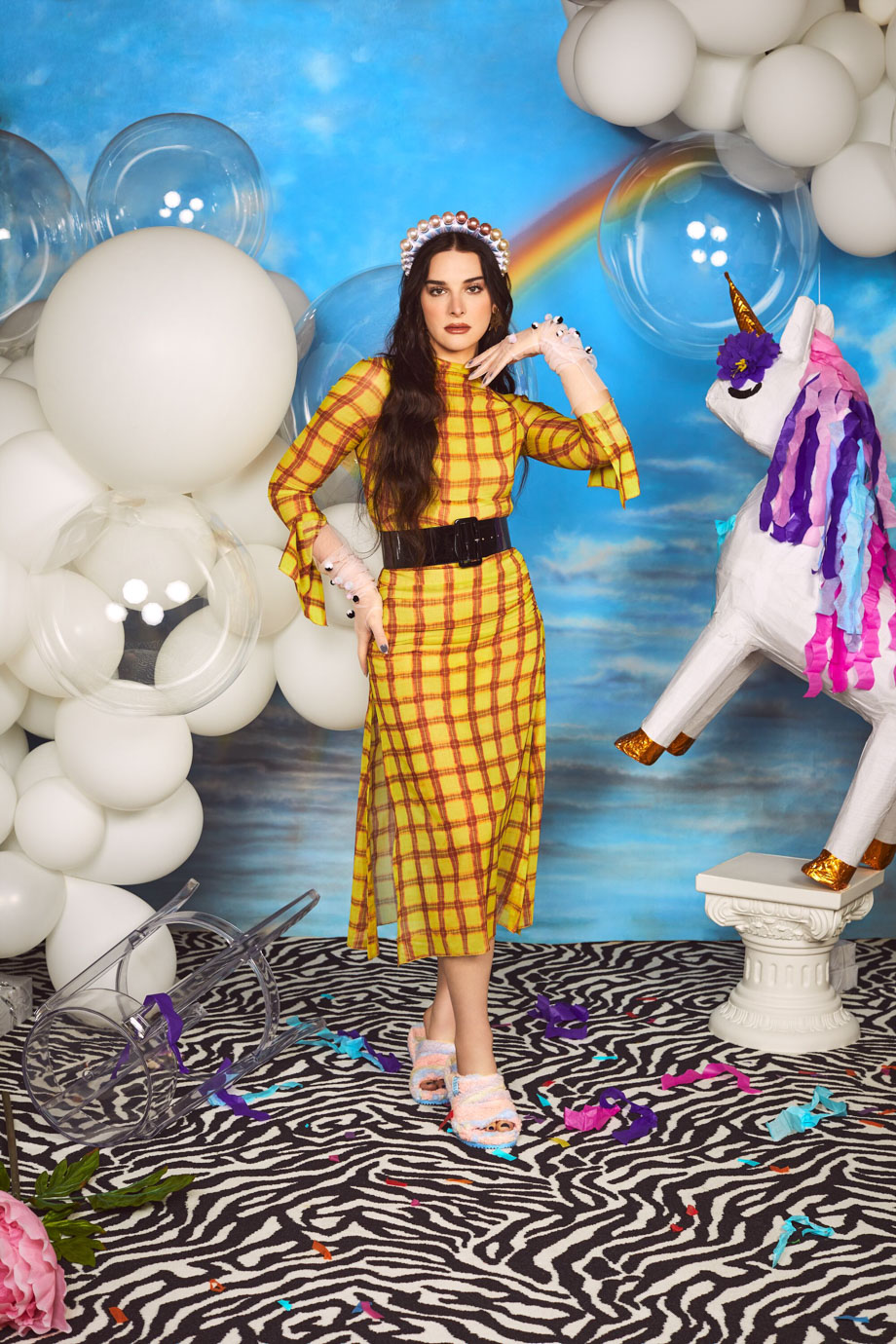 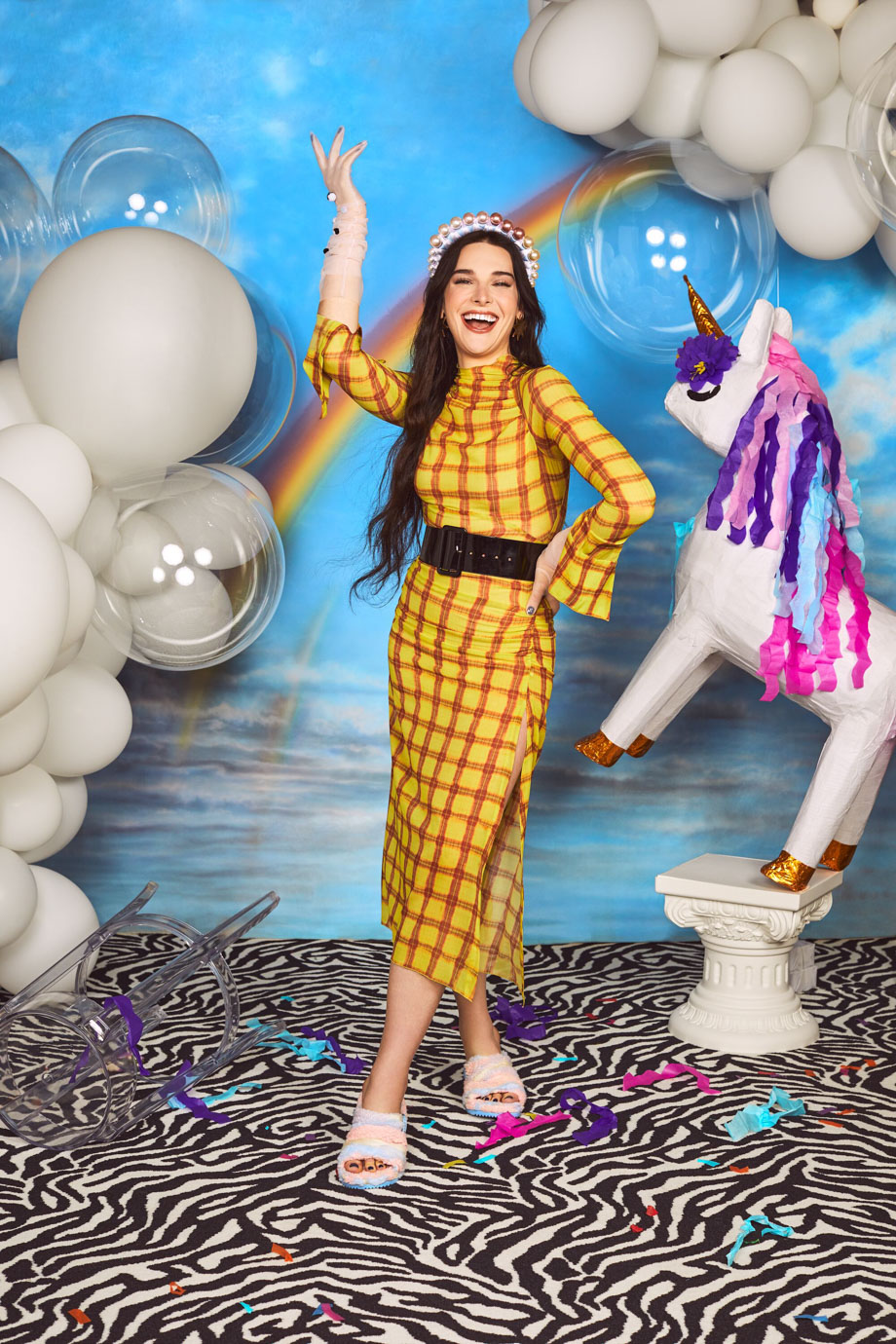 I think the place I’m arriving with my own queerness and transness is that I look more or less the way I want to look, I feel more or less the way I want to feel. Most of the time when I walk down the street, I meet people, I talk to people, and I’m just a girl. And then there are other times when like, boom, out of the blue, I get mis-gendered or, especially being out as a public-facing person, fielding all those expectations. All the nasty stuff people say, I need to take the compliments about myself as a woman or a trans woman, and I have to take the negativity about myself as a woman or a trans woman – I have to look at both of those and just be like, “Neither one of these really has to do with me.” The most important thing is how I feel about myself. And I can’t let the outside feedback infiltrate here, whether it’s getting so pumped up like, “Oh, I’m so pretty” or “Oh, I’m so ugly.” There’s got to be a balance. The balance is somewhere in there, and I’m still finding it.

Prom is as American as apple pie. It’s a part of how we come of age, and it’s a rite of passage. It’s a moment for young people moving from one threshold to another to celebrate themselves and feel themselves. Somewhere down the line – I don’t really know where – prom became this thing where a boy wears a tux and a girl wears a dress and one asks the other. It became kind of a promenade for who fits into that paradigm best. For there to be a queer prom, that’s more “prom” than prom. It centers the self-celebration and the rite of passage, instead of all the superficial corsage-y stuff that apparently came with it. 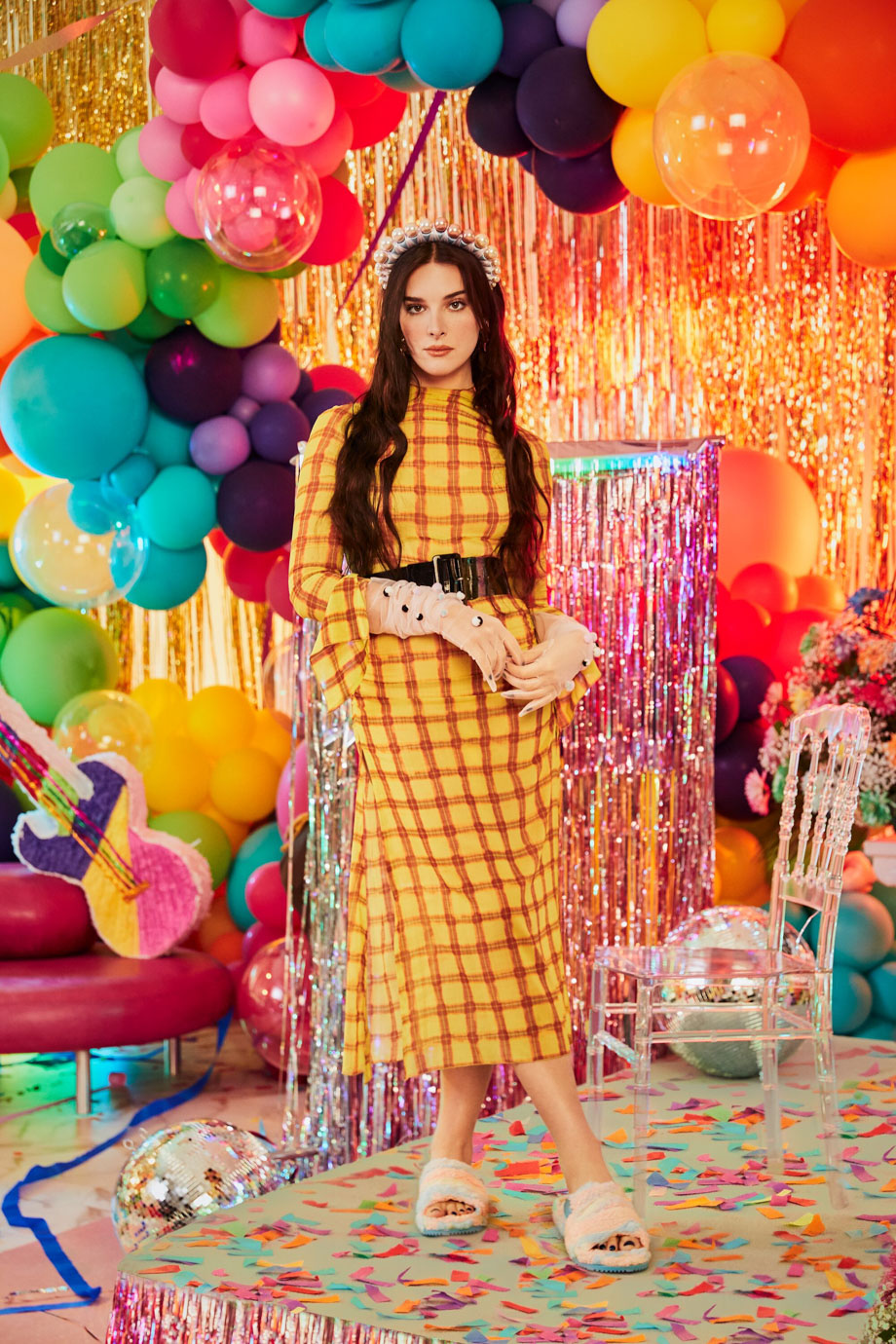 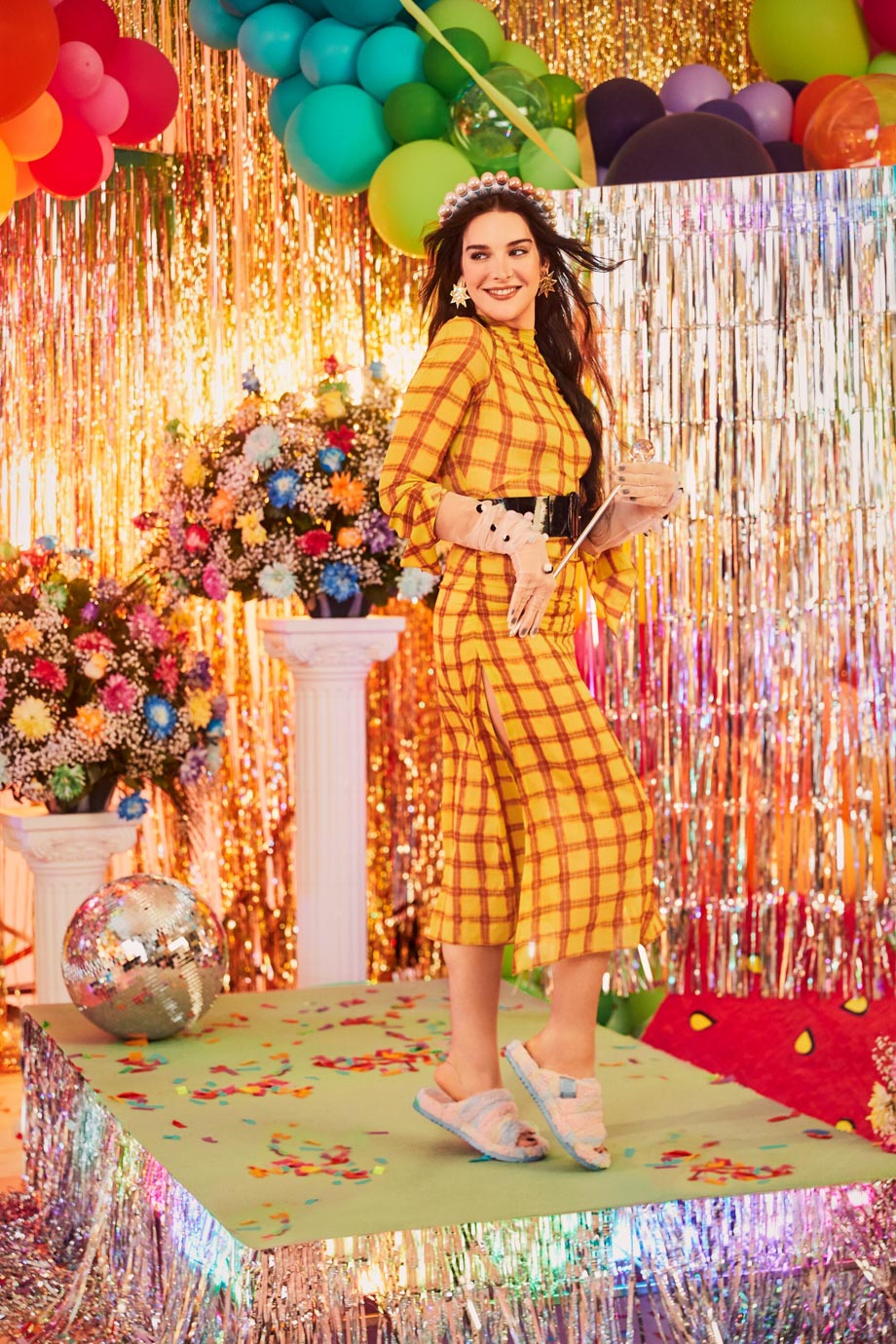 Style and fashion – it’s my toolbelt. It’s my artillery. It’s the fort I build between precious, delicate me, and everything else. Fashion is how I communicate my needs, my needs from the world – my demands, sometimes.

The collection is just freaking comfortable. I mean, before I even did the campaign, they sent me the slides from last year, and those are my house shoes. Those are my slippers. You can ask any of my friends. I open the door to my house, I’m home, I’ve got the candles blasting, and I’m in my UGG slippers.

What I love about the collection too is that people often conceive of queerness and queer fashion as this severe thing, you know, like a drag queen in six-inch heels, or a leather stud. This is like queer coziness and queer domesticity. It’s actually kind of unexpected. It’s so comfy. Queer comfort, haha.